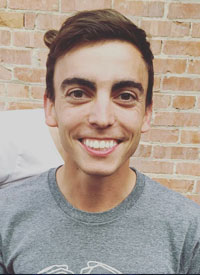 Biography
After graduating, I worked in Akron and Cleveland on films that were shooting in town for a couple years. I moved to Los Angeles in 2012, and was chosen to become a part of the Directors Guild’s Assistant Director Training Program. A couple years later, I joined the DGA as a 2nd Assistant Director. I have worked on movies such as “The House” starting Will Ferrell and Amy Poehler, “The Marksman” starring Liam Neeson, and TV shows such as It’ Always Sunny in Philadelphia, Community, Arrested Development, Workaholics, and Curb Your Enthusiasm.

Favorite ΣΧ memory
Derby days my senior year when I was Quaestor and helped a lot running it. Also, making a video for the chapter that ended up winning 1st place at BLTW. Representing the chapter on Homecoming Court and being chosen as Homecoming King was also great!