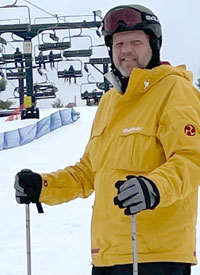 Biography
Entered Army after graduation. Served in Desert Storm and Somalia as a Medevac pilot. Among other awards won the Sikorsky Helicopter Rescue Award. Also flew in the longest self-deployment of helicopters to a combat zone. After early retirement worked for Department of the Army for 21 years managing an Army airfield in Wiesbaden Germany. Volunteered for 15 years as a Scoutmaster of a Boy Scout troop in Germany. Wife, Petra, one son, Kevin.

Favorite ΣΧ memory
Pinning the badge on my son. Derby Days back in the day….